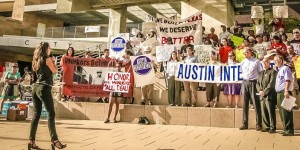 Austin Interfaith leaders celebrated the passage of a historic living wage ordinance they had fought for over the course of five years. Institutional representatives from congregations, schools and workers associations challenged city council candidates in 2012 to craft an ordinance requiring that jobs emerging from taxpayer incentives pay at least a living wage or prevailing wage, if higher. An economic incentive team put together language, which included an exception process, that was later adopted by a Special Committee on Economic Incentives and proposed by Councilmembers Martinez, Tovo and Morrison (and enhanced by Councilmember Riley) Thursday night.

Catholic Bishop Joe Vasquez intervened reading a statement of support for the ordinance at a 6pm rally, which was later read by an Austin Interfaith leader in Council chambers. After four hours of testimony and debate, the City of Austin passed, for the first time ever, a requirement that corporations receiving taxpayer incentives be required to pay the City established living wage of $11 per hour or prevailing wages, whichever is higher.

Then There's This: A 'Decent Wage', Austin Chronicle