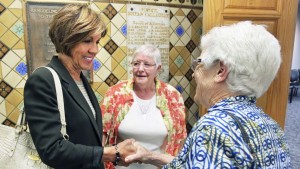 COPS / Metro leaders and allies are celebrating a huge victory â€” the city manager and a majority of city council members are now agreeing to COPS / Metro's proposal to raise wages for the lowest paid city workers to $13 / hour for fiscal year 2016. This exceeds the City's current living wage standard of $11.47 / hour.

"We are ecstaticâ€” this is a huge step for public sector employees, not only in the state, but in the nation. We are proud to have spearheaded this campaign and to have gained the support of our council members and the manager," said Mr. Robert Cruz of St. Leo the Great Catholic Church. In photo, Sisters Josephine Murray and Gabriella Lohan of COPS / Metro personally thank City Manager Sheryl Sculley for her support.