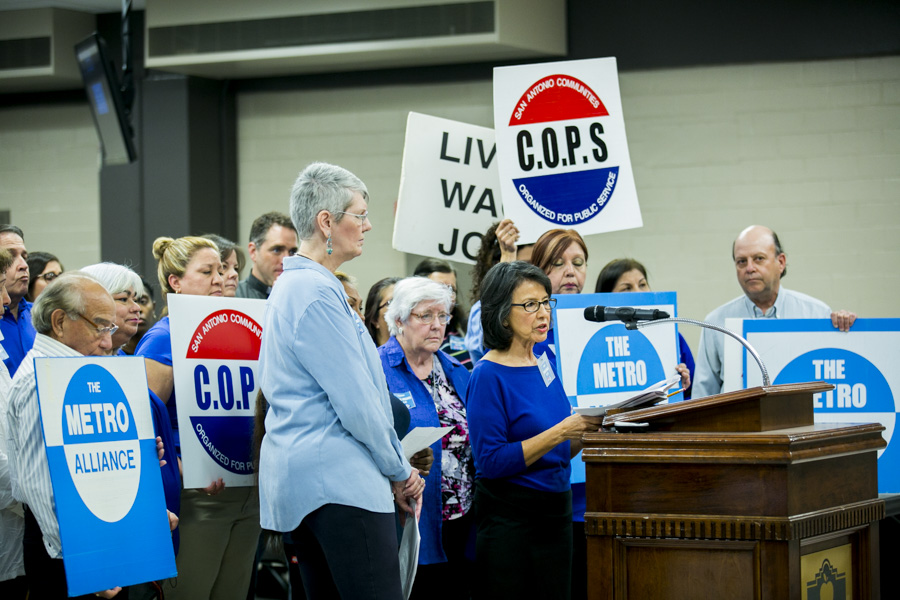 Arguing that the "stress of poverty" has a toxic effect on children's developing brains, COPS / Metro leaders stormed a San Antonio Independent School District Board meeting asking for wage raises for the lowest paid district workers, including bus drivers and cafeteria workers, to at least $13 per hour. A low wage job, said Maria Tijerina, "undermines a child's ability to learn."

Cafeteria manager Vanita Rodriguez spoke on behalf of her employees, revealing that every one she works with holds down at least two jobs to make ends meet. As the parent of 7 and the grandparent of 24, most of which are SAISD students, she knows that poverty hampers children's capacity to learn. COPS/Metro joined forces with the San Antonio Alliance of Teachers and Support Personnel to raise this issue with the School Board and met with all 7 trustees prior to the board meeting.

After collective bargaining with the city manager stalled, the police officers union asked The Border Organization (TBO) for help. Politicizing the issue of police pensions and wages, police union firefighters and TBO leaders targeted the City Council, meeting with individual members to line up the four votes they needed. On the day of the vote, police, firefighter, cafeteria worker and TBO congregational leaders piled into the chambers. After a two hour debate, the council unanimously voted to increase city retirement matches on police and firefighter pensions, maintain previously promised step increases, AND increase all city worker wages by 2%!