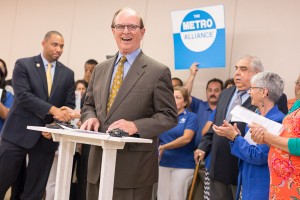 Days before the San Antonio mayoral election runoff, church and state united to urge voters to the polls and while there, to remember that San Antonians need a living wage. COPS / Metro leaders and Bexar County Judge Nelson Wolff, with Commissioners Tommy Calvert and Paul Elizondo, held a joint press conference announcing that the County would do their part to increase wages, and that the City should as well. Councilmembers Shirley Gonzalez and Rey Saldana showed up in support.

In the lead up to this election, leaders held an accountability session with Mayoral candidates, asking for their support on matching the County wage hike (to $13 / hour this year and $15 / hour in two ) and increasing investment in long-term workforce development.