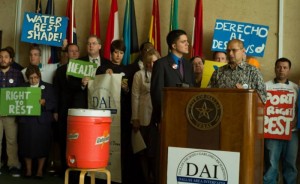 With renewed focus on local and winnable immigration reforms, Dallas Area Interfaith leaders are lending its significant muscle to a push for water breaks for construction workers and enforcement of wage theft laws.

After DAI briefed the Dallas City Council on the need for a rest break ordinance to protect the health of construction workers, the Council took the step of charging the Economic Development Committee to work with stakeholders to craft an ordinance. 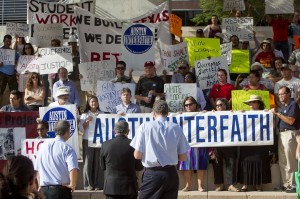 In the latest segment of a long-standing battle for living wages in Central Texas, 200 supporters of construction workers, including Austin Interfaith leaders, Catholic Bishop Joe Vasquez of the Austin Diocese and Workers Defense Project, rallied on the steps of City Hall demanding that workers receive the pay promised to them by developers of White Lodging, in exchange for $3.8 million in fee waivers granted by the City.