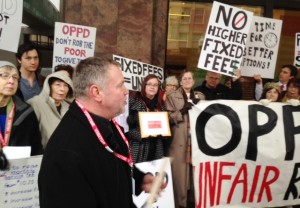 In reaction to a proposal from the Omaha Public Power District to more than triple fixed fees from $10.25 to $35 per month, Fr. Mike Eckley and other OTOC leaders publicly challenged the wisdom of punishing low-income families for conserving energy. OTOC not only succeeded in compelling the Board to reduce the proposed increase by 80%, the Board was forced to create a $1.5 Million customer assistance program for low-income low-use families. Leaders plan to intervene in the November 2016 Board election to prevent future fixed fee hikes from being phased in.

On the dignified housing front, Omaha Together One Community (OTOC) not only succeeded in tripling the budget for demolition of blighted properties between 2012 and 2015, it persuaded the City Council to increase housing re-inspection fees levied on neglectful property owners, sufficient to increase the number of trained rental housing inspectors in the field to nine. In a move against slumlords who abandon their properties, OTOC compelled the Council to pass a vacant property registration ordinance requiring owners to pay $500 for every quarter a house lies vacant (up to $2,000 / year). OTOC succeeded over the opposition of the Landlord's and Nebraska Bankers associations.