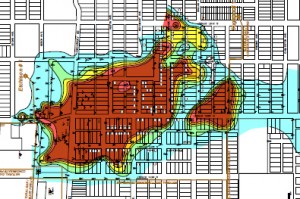 Valley Interfaith is drawing a connection between stories of cancer-related deaths, three gas stations and a benzene plume moving through a neighborhood blocks from St. Joseph the Worker Catholic Church in McAllen. Leaders are in the midst of a research campaign with the Texas Commission on Environmental Quality (TCEQ), Texas state legislators and County Commissioners to get to the bottom of the benzene plume. Discovery of the toxic gas plume emerged from a listening campaign about the concerns of Rio Grande Valley residents.

After months of battling for cleaner air, Pomona Valley leaders of the Inland Empire Sponsoring Committee leveraged multiple concessions on a waste transfer station agreement. A maximum of 50 trucks would be permitted on and off the site per day. All trucks would be required to operate on clean compressed natural gas or other alternative fuels. Tonnage limits (at 66% of the original proposal) will help prevent neighboring suburbs from shrugging off its processing responsibilities; the transfer station will accept trash almost singularly from Pomona. And a new code enforcement position has been created to monitor particulate standards and ensure that other stations in the region operates in complies with clean air standards.