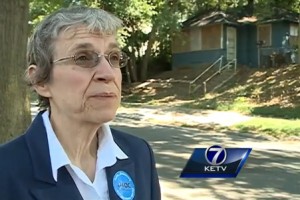 Omaha Together One Community (OTOC) leaders applauded the decision of the Mayor and City Council to finalize $957,000 for demolition of condemned houses and $25,000 to support job training in the 2014 Budget.

OTOC advocated for increased demolition funding in the 2013 budget and as a result, approximately 93 structures will be demolished this year, nearly triple the number from 2012. OTOC expects that the $957,000 in demolition funding in the adopted budget will allow the city to demolish over one hundred dangerous, condemned buildings in 2014. "These demolitions will heighten the quality of life for neighborhoods, businesses, and nearby institutions like churches and schools like the one where I work " said OTOC leader Karen McElroy.