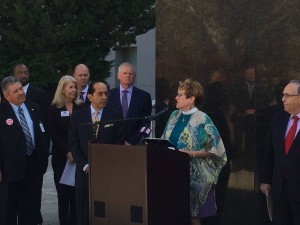 Leaders of 'Nevadans for the Common Good' were among the heavy-weights listed as supporters of a proposed tax plan that would generate $430 million for Nevada public schools over the next two years. At a press conference the morning of Governor Sandoval's presentation of the proposal, NCG leader Rev. Dr. Marta Poling-Goldenne called this "a historic opportunity to improve our public schools and invest in our children."

One week prior, 'Nevadans for the Common Good' met with the Las Vegas Global Economic Alliance at Holy Spirit Lutheran Church in Las Vegas; both organizations voted to support the business license proposal. LVGEA cited a study it had commissioned on the impact of the business license fee proposal, which concluded that the "negligible negative impact" in Southern Nevada would be far outweighed by the benefits of improved public schools. 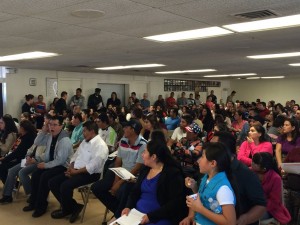 When Nevadans for the Common Good (NCG) decided to host an information session on the executive order on immigration (DPA & DACA) hundreds piled into St. Christopher Catholic Church in Las Vegas. NCG leaders, with St Christopher, is integrating immigrants into the fabric of community while building non-partisan political power for the common good.