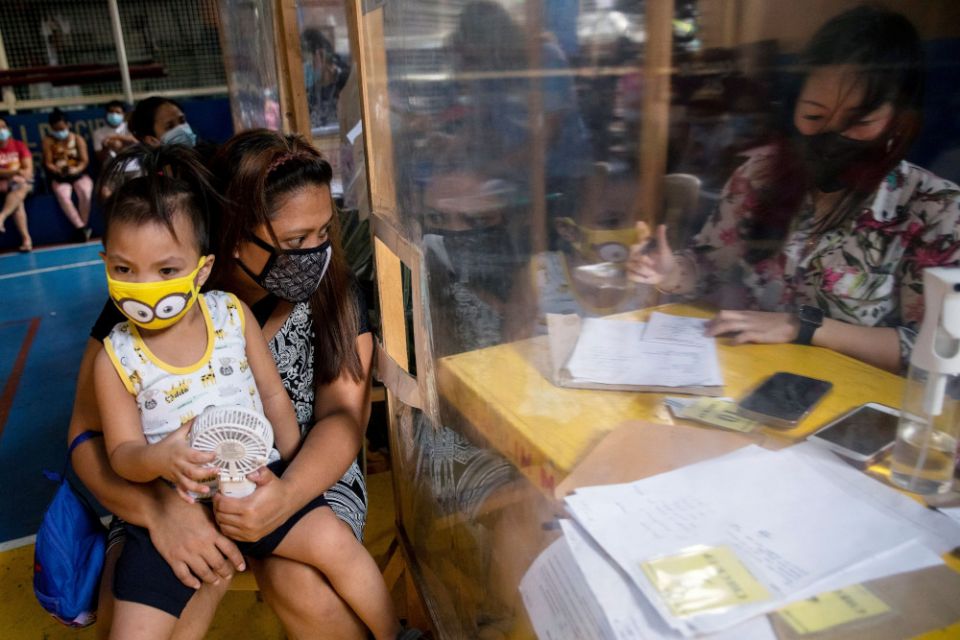 In Tucson, Arizona, work at Pima County Interfaith began advocating for pandemic relief as the pandemic hit, seeing it as a natural outgrowth of its grassroots work.

Ana Chavarin, an organizer with the Catholic Campaign for Human Development-funded organization, said its community leaders quickly advocated for rental assistance for people threatened with eviction. And, after weeks of activism, members were able to convince health care providers to bring vaccines to some of the most vulnerable communities Feb. 6.

She credited local leaders for their work in neighborhoods, parishes and church congregations. She said the effort is rooted in church teaching on solidarity and recognizing the dignity of each person....

Chavarin recalled that when coronavirus testing began in Tucson, the site was established far from low-income communities. For people with a vehicle, the trip would take 40 minutes. However, for poor residents it required riding on multiple buses on a trek that took several hours in each direction.

To prevent such inequities, Chavarin urged collaboration among low-, middle- and upper-income residents to develop solutions to community challenges. While such conversations might currently be pertinent during the pandemic, they could also lead to meetings on environmental issues, jobs and education, she said.

She cited the letter to the Corinthians for inspiration in understanding the importance of building such relationships: "When one part of the body is hurting, then the whole body is hurting."

"We need to understand," Chavarin said, "that we are one body in need of creating those connections and having those conversations to talk about specific goals." 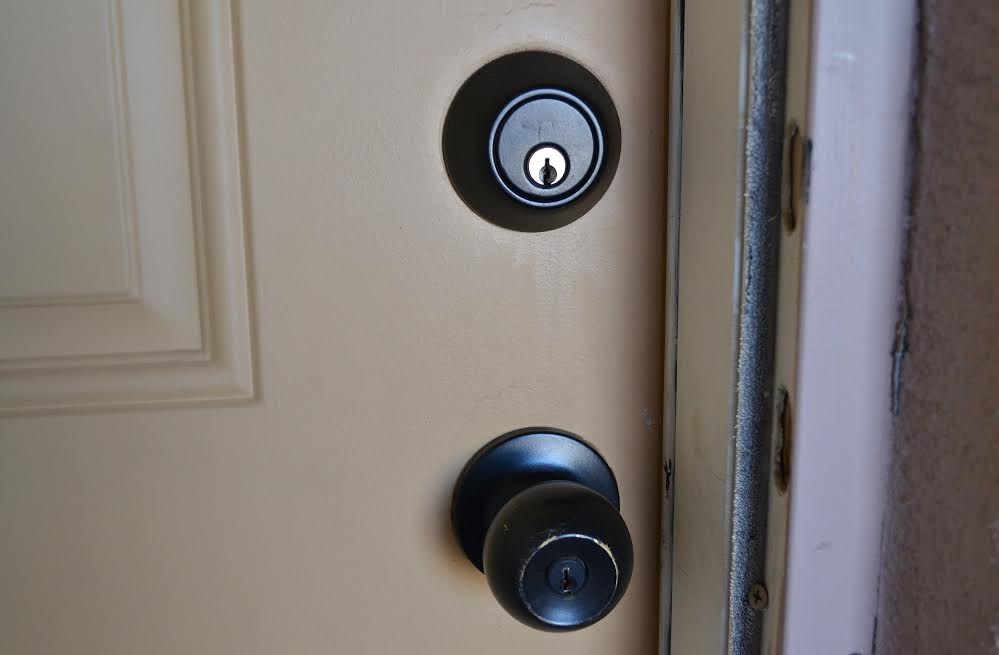 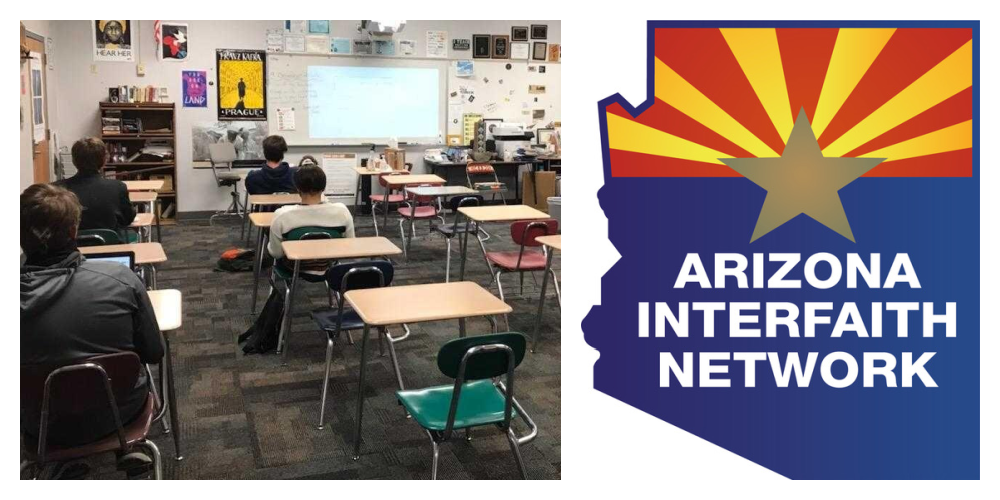 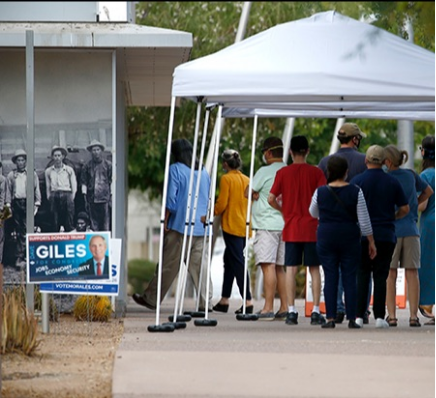 “The unwarranted provocation, aided and abetted by fringe group extremists, is an affront to the democratic process," said clergy and religious leaders of the Arizona Interfaith Network.  Prior to the election, they reminded "all citizens that it is important to vote, regardless of your party affiliation, and to vote with confidence." 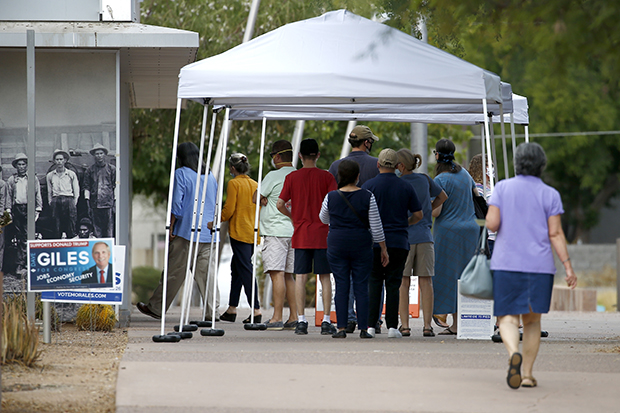 Voting is now underway at a torrid pace, and soon we will know the much-anticipated results of our pending election. Still, we hear misguided threats and attempts to cast doubt on the election process and how well ballots will be counted.

As faith leaders of the Arizona Interfaith Network who lead congregations that claim active members of all political persuasions, we want to remind all citizens that it is important to vote, regardless of your party affiliation, and to vote with confidence.

We are impressed with both the safeguards and security measures they have put in place, especially provisions for voting during the pandemic. This includes hiring and training additional poll workers, securing safe locations for voting, and preparing for the early tabulation of mail-in ballots, currently underway.

Cooperation of citizens, candidates, and parties is crucial. We implore everyone, whatever your political leaning, to trust the process. Attempts to harass, intimidate, or otherwise suppress the vote of fellow citizens will not be tolerated. These would be an affront to the rule of law, and we will be among the first to denounce such behaviors.

With 50% of prisoners testing positive for COVID-10 in one prison alone, and after several conversations with the Governor, DOC Director and Director of Health Services, Valley Interfaith Project leaders are calling for rapid testing of prisoners across Arizona.

"Your current testing plan for the state’s prisons, which just commenced, is too drawn out," Valley Interfaith Project leaders said in a letter to Shinn on Wednesday. "The rapid spread of the virus and the still ongoing unevenness of response by your Department will lead to more loss of life without drastic and immediate interventions." 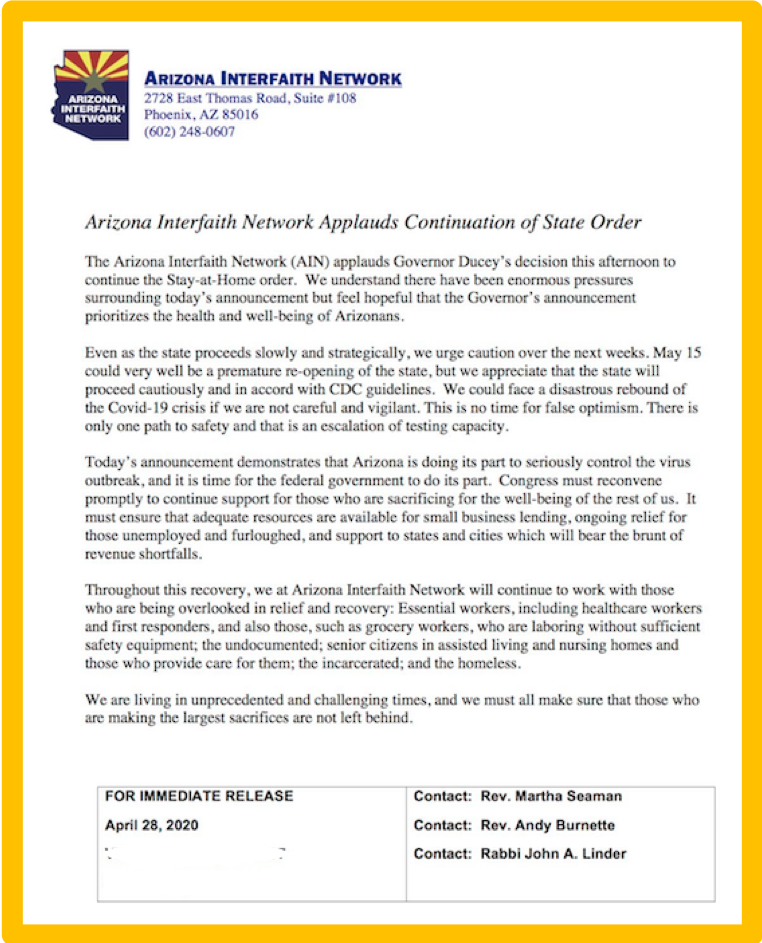 After hundreds of VIP clergy and leaders, through a petition with their state Arizona Interfaith Network (AIN), called on Governor Ducey to extend the Stay-at-Home order past April 30, the Governor announced an extension of the Executive Order, with gradual loosening of current restrictions over coming weeks.

Clergy representatives of AIN responded with a statement of cautious approval:

"May 15 could very well be a premature re-opening of the state, but we appreciate that the state will proceed cautiously and in accord with CDC guidelines. We could face a disastrous rebound of the Covid-19 crisis if we are not careful and vigilant. This is no time for false optimism. There is only one path to safety and that is an escalation of testing capacity."

Ducey Extends Stay-At-Home Order Through May 15 But Eases Some Restrictions on Businesses, The Arizona Republic [pdf] 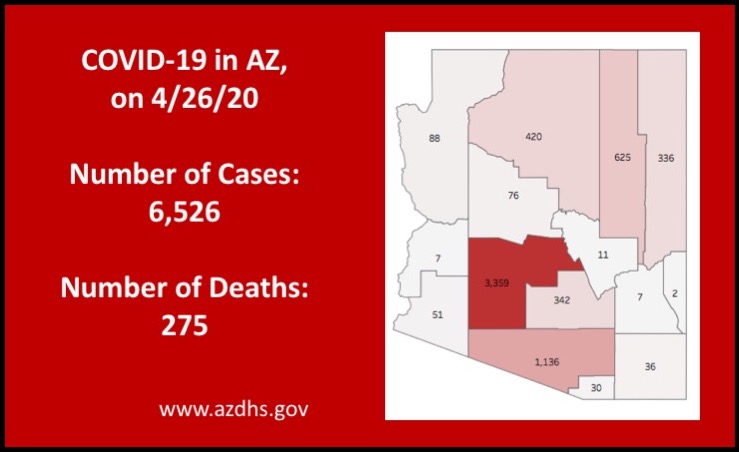 Ducey’s executive order, made over a month ago, is set to expire at midnight on Thursday, unless the governor modifies or extends it.

In a letter organized by the Arizona Interfaith Network, [including Valley Interfaith Project and Pima County Interfaith] religious leaders praised Ducey for issuing the order in the first place. Now the governor must avoid the “false calculus” that pits Arizona’s economy against peoples’ lives, they wrote.

"The economy should serve the common good and promote dignified, safe work, particularly for the most vulnerable,” the letter states. “This a moral decision, not just a business decision. We must do all we can to save lives; life is irreplaceable.”

Ducey faces pressure from Republican leaders in Arizona, including the head of the Arizona GOP, to reopen the economy as soon as possible.

But faith leaders stated that Ducey should rely on clear and convincing science — that means robust testing and contact tracing — to decide when it’s safe to reopen Arizona’s economy.

“The coronavirus will only be contained by broad testing and the application of our best public health measures,” they wrote. “The disease will not cooperate with deadlines imposed by us.  It will not respond to political calculations or wishful thinking, and neither should the state of Arizona.” 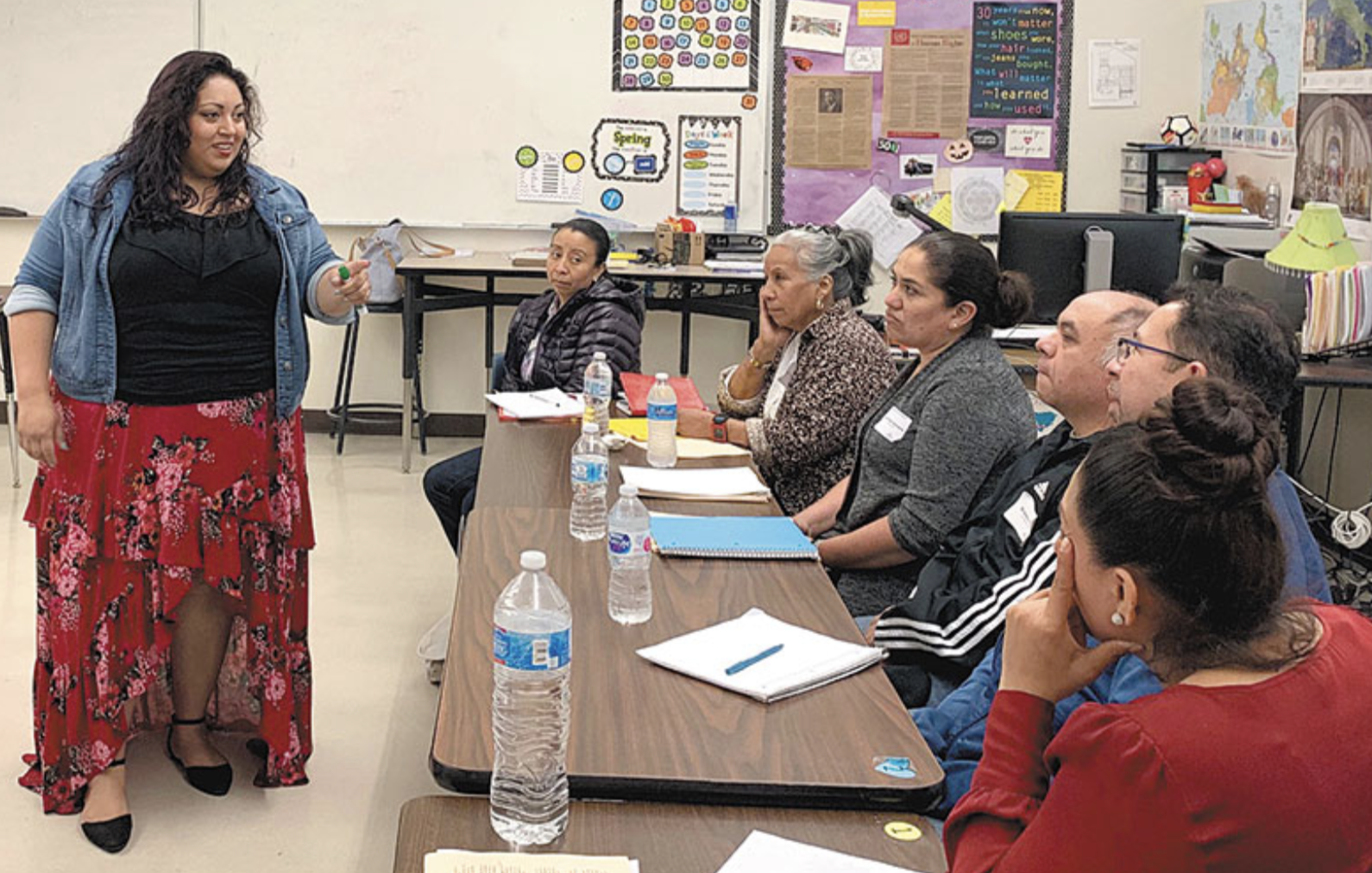 Having worked with PCI for the past four years, Ana was originally nominated by the Diocese of Tucson’s Office of Human Life & Dignity.  Said Sr. Leonette Kochan, the department's former director:  “Ana's Catholic faith motivates and inspires her role as a parent, faith community member, and leader in the wide range of social outreach initiatives in which she participates.  Her courageous determination and the support of others found expression in her life of service to others, especially in programs that empower the lives of others. As a person who faces economic struggles as a single parent of four children, Ana also leads by example in balancing family life with work, while pursuing a college degree.”

In 2018 she won a US Conference of Catholic Bishops (USCCB) award for Hispanic Catholic Leaders and was also recognized by the Arizona Daily Star for her community achievements (see links further below).

This honor, awarded annually to an outstanding young adult, recognizes the leadership, energy and diverse skills that young people bring to the anti-poverty work of community organizing projects and Catholic parishes.

Ana was nominated by the Diocese of Tucson’s Office of Human Life & Dignity, and she will be formally presented with the Cardinal Bernadin award at the November meeting of the US Catholic Bishops to be held in Baltimore later this year.

Ana has worked with PCI for the past four years.

In 2018 she won a US Conference of Catholic Bishops (USCCB) award for Hispanic Catholic Leaders (see below).   She was also recognized by the Arizona Daily Star for her community achievements (see further below).