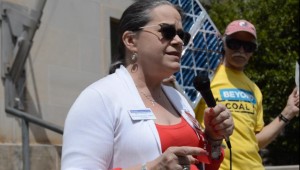 When Oklahoma Gas & Electric (OG&E) first attempted to shift the cost of plant updates to consumers rather than to shareholders VOICE-OKC fought back, urging the utility commission to stop the plan and leveraging the Attorney General's support for a lower charge. In 2016, OG&E proposed a rate increase of $92.5 million ($7 per month) to cover the expenses, but they again found themselves up against dogged VOICE leaders.

This year, Elise Robillard declared on behalf of VOICE-OKC, "It's time to stop protecting profits for major corporations like OG&E and start protecting the families of Oklahoma, people who are going to have to choose between buying groceries and paying their electric bill." Finally succumbing to organized campaigns of weekly calls to address the issue, the utility commission ruled, permitting OG&E an $8.9 Million rate increase (only 72 cents per month). Furthermore, the commission will claw back $50 Million in back charges to residential users, inappropriately charged by OG&E prior to the ruling.