Statement on the Insurrection at the U.S. Capitol 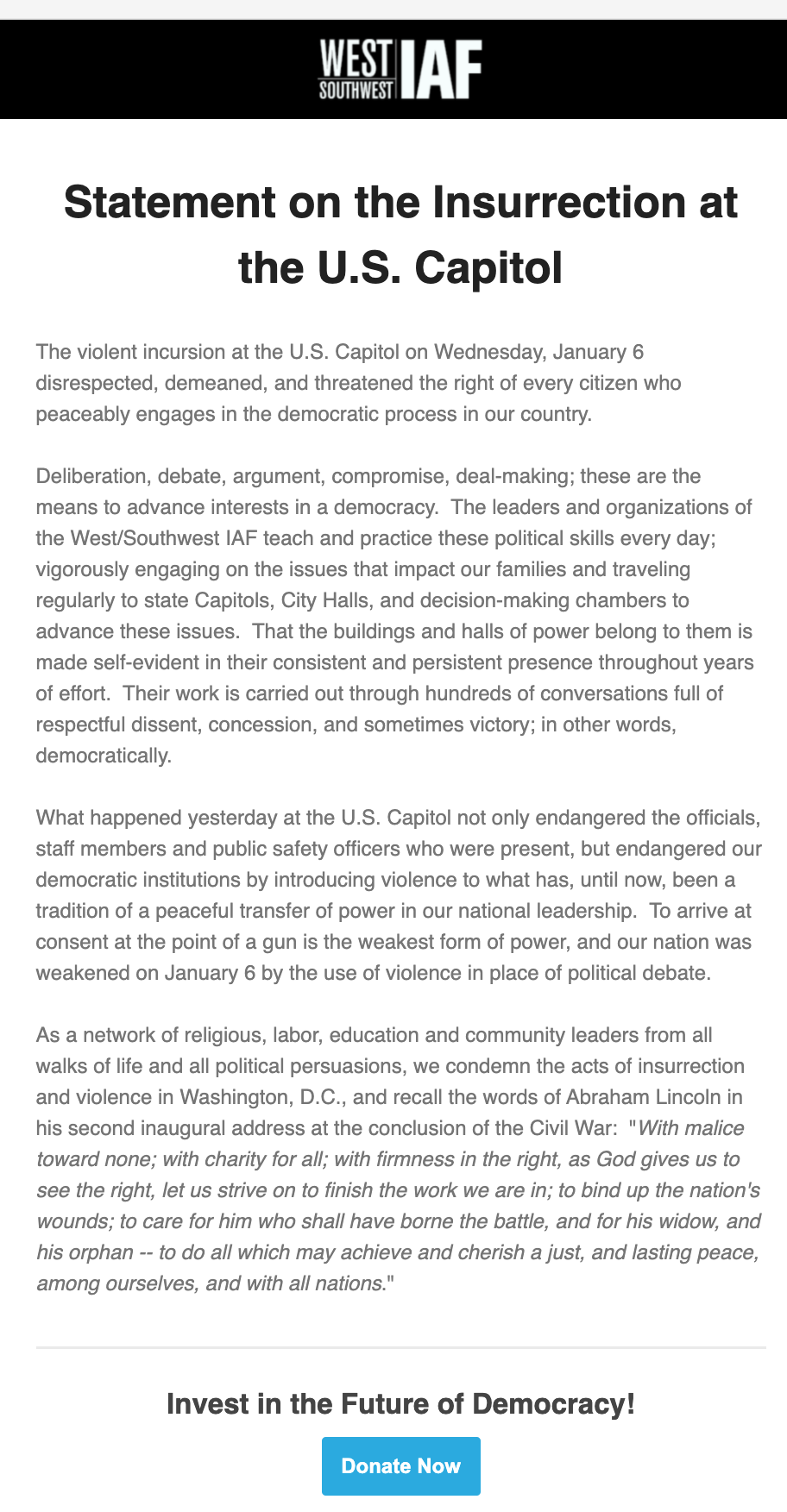 The violent incursion at the U.S. Capitol on Wednesday, January 6 disrespected, demeaned, and threatened the right of every citizen who peaceably engages in the democratic process in our country.

Deliberation, debate, argument, compromise, deal-making; these are the means to advance interests in a democracy.  The leaders and organizations of the West/Southwest IAF teach and practice these political skills every day; vigorously engaging on the issues that impact our families and traveling regularly to state Capitols, City Halls, and decision-making chambers to advance these issues.  That the buildings and halls of power belong to them is made self-evident in their consistent and persistent presence throughout years of effort.  Their work is carried out through hundreds of conversations full of respectful dissent, concession, and sometimes victory; in other words, democratically.

What happened yesterday at the U.S. Capitol not only endangered the officials, staff members and public safety officers who were present, but endangered our democratic institutions by introducing violence to what has, until now, been a tradition of a peaceful transfer of power in our national leadership.  To arrive at consent at the point of a gun is the weakest form of power, and our nation was weakened on January 6 by the use of violence in place of political debate.

As a network of religious, labor, education and community leaders from all walks of life and all political persuasions, we condemn the acts of insurrection and violence in Washington, D.C., and recall the words of Abraham Lincoln in his second inaugural address at the conclusion of the Civil War:  "With malice toward none; with charity for all; with firmness in the right, as God gives us to see the right, let us strive on to finish the work we are in; to bind up the nation's wounds; to care for him who shall have borne the battle, and for his widow, and his orphan -- to do all which may achieve and cherish a just, and lasting peace, among ourselves, and with all nations."

Cortes: To Arrive at Consent at Point of a Gun is Weakest Form of Power, Rio Grande Guardian [pdf]

Listen to Lincoln: 'With Malice Towards None; With Charity For All', Arizona Republic [pdf]