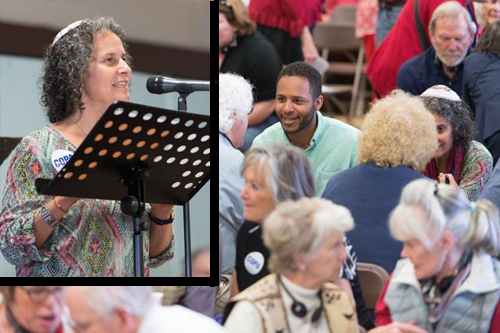 Representing over 30 institutions from Santa Cruz, Monterey and San Benito counties, 300 leaders of COPA convened at St. Francis Xavier Catholic Church in Seaside for its spring assembly. Framing the assembly through the notion of covenant, Rabbi Paul Marcus of Temple Beth El in Aptos asserted that when leaders speak to city council members on each other's behalf, when the body holds the District Attorney's office accountable, when they secure funds for for low-income residents, they are acting like the biblical figure Ruth.

Leaders told stories about securing healthcare funds for undocumented patients, the importance of local implementation of Prop. 47, the need for affordable housing and a strategy to develop alternative lending options for low-income families.

COPA secured commitments from the Monterey County Supervisor Board Chair Jane Parker to to support continuation of COPA's healthcare pilot and from Santa Cruz Supervisor John Leopold to identify funding sources for expanded treatment and rehabilitation for incarcerated and previously incarcerated people.

Local Democracy in Action by COPA