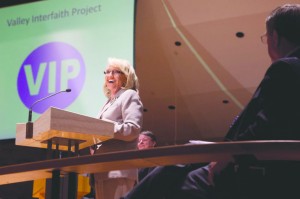 "Meeting city, state, faith and education leaders on Thursday, Sen. John McComish, of District 18, voiced his continued support for Gov. Jan Brewer's plan to expand Medicaid in the state at a panel hosted by the Valley Interfaith Project (VIP).....McComish and Rep. Heather Carter, of District 15, pushed the expansion that would give Medicaid to about 300,000 low-income Arizona residents.