At a community meeting organized by Dallas Area Interfaith, there were no easy platitudes in reference to the Thursday night shooting of police officers and protesters that left five officers dead. "There is a repentance that has to happen in this nation," preached Pastor Carl Sherman to the crowd gathered at Southern Hill Church of Christ. More than a dozen officers, from six law enforcement agencies across the Metroplex, sat in the pews alongside civilians to hear their public service praised and critiqued. 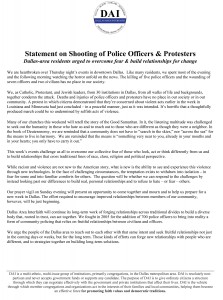 "Building trust is how we are going to get better policing," said Josephine Lopez-Paul, the lead organizer of Dallas Area Interfaith. Click on statement at right to read DAI's statement.

Next steps for the organization include a follow up meeting in next week to address public safety concerns in neighborhoods across the city.

Some Blacks and Latinos Say Conversation on Race and Policing is Being Forgotten, Dallas Morning News

Limits of Politics at a Time of National Trauma, Washington Post