Standing Up to Fear, EPISO/Border Interfaith Organizes a Response Rooted in Hope 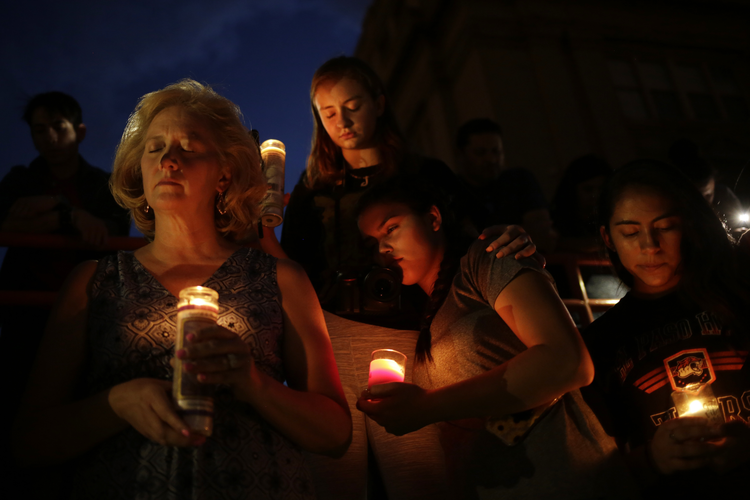 [Excerpts from America Magazine below...]

The Rev. Pablo Matta was one of a number of priests who visited El Paso hospitals in the hours after a gunman with a high-powered rifle opened fire Aug. 3 in a Walmart massacre that took 22 lives....“I saw a lot of the people that died,” Father Matta said....

“There’s a lot of grief,” [Dolores DeAvila] said. Ms. DeAvila, a leader with El Paso Interreligious Sponsoring Organization/Border Interfaith, has spoken with many who lost loved ones in the shooting or were in the vicinity. She described the panic that ensued in nearby restaurants, including one where people hid in a walk-in cooler. “We say we’re prepared [for a mass shooting], but we’re not,” she said.

EPISO/Border Interfaith is organizing a community event on Aug. 8 at St. Paul Church, where Father Matta is pastor. In addition to fear, Ms. DeAvila said there is a lot of anger around assault weapons.

“This is a community that was attacked and they understand that,” Joe Rubio, director of the West/Southwest Industrial Area Foundation, a network of community organizations, said of the attack.

“There is incredible grief, and it’s starting to turn into anger. People are starting to look for someone to blame for this,” Mr. Rubio said. “The church can take part in helping to shape people’s reaction to this. Not just by having a vigil, but in a way people can create public accountability for who bears responsibility for unleashing this kind of destruction and hate.”

Mr. Rubio believes there should be an organized response supporting restrictions on assault rifles and background checks for individuals seeking to purchase firearms. “There’s a prophetic role for the church to play in this conversation,” he said. “We’re going to either proactively save people or they’re going to pay with their lives.”