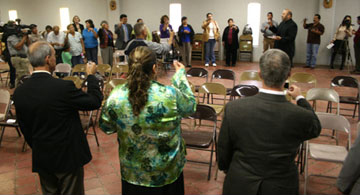 Over 20 years ago, a developer in the City of El Paso bought acreage in an undeveloped plot of land, an "island" landlocked by, but not included within, El Paso's municipal boundaries. The developer recorded the purchase with the County, but then â€” unbeknownst to anyone â€” illegally partitioned the land and sold the reduced-sized lots to low-income families without providing certificates of occupancy.

120 families built their homes in the Norma-Georgia-Seventh-La Mesa colonia, having little idea they had purchased, and were residing in, illegal subdivisions. Because the land was not part of the City, and illegally partitioned in the County, neither local nor state entities took responsibility for ensuring access to safe water.

Families from this subdivision who were members of St. Patrick's Catholic Church expressed their struggles at a house meeting convened by Fr. Pablo Matta. They later partnered with Border Interfaith to begin learning how to bring infrastructure to their colonia.

While working with the families, Border Interfaith leaders discovered the unauthorized nature of their tenancy. Leaders began educating Commissioners about the history of their colonia and the need to secure certificates of occupancy as a necessary step to securing safe access to water. Their first victory consisted of compelling the County to formally recognize and register their occupancy.

The fight for the extension of city water lines into the neighborhood continued as they requested funding from the Texas Water Development Board and financial assistance from the Economically Distressed Areas Program, only to learn that state funding had been depleted.

Finally, Border Interfaith and EPISO approached the CEO of El Paso Water Utilities to request $2 Million to extend public water utility lines into Norma-Georgia-Seventh-La Mesa. Together, the CEO and the leaders worked to secure the necessary votes from its Board, leveraging a unanimous Board vote in support of the $2 Million funding.

Construction is programmed to begin in October of 2017.

See Texas Standard reference to prior success in the colonias