IAF Organizations Lead the Way on Living Wages in Texas 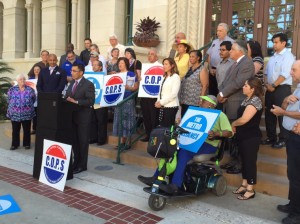 In Austin, the local IAF organization helped form a Living Wage Stakeholder Group which recommended that the City of Austin increase their lowest wages to $13.03 / hour for adult full-time, part-time and temporary workers. Austin Interfaith leaders are urging the council to adopt this proposal; council will vote on the proposed increase in early September.

In El Paso, leaders of Border Interfaith and EPISO succeeded in getting El Paso County Commissioners to increase the wages of their lowest paid workers by 50 cents to $10 / hour. Commissioners have pledged to work with the organization to increase wages even higher over the next two years. Thanks to the intervention of EPISO and Border Interfaith leaders, the City of El Paso has followed suit, raising the wages of their lowest paid to $10.35 / hour.

In Dallas, Skill QUEST -- the long-term job training program created by Dallas Area Interfaith -- celebrated its 400th graduate. Leaders are working to expand the impact of Skills QUEST by leveraging additional public sector dollars into the job training program. Skill QUEST is one of six IAF labor market intermediaries working to train people out of poverty and into living wage careers.