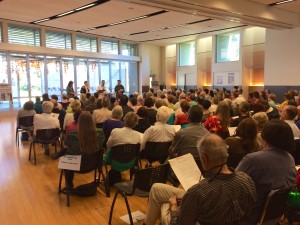 Fairfax became the first municipality in Marin to commit to providing funding for the expansion of the REST winter homeless shelter program into a year-round project, thanks to intervention from the Marin Organizing Committee. The Town Council voted unanimously to approve a request for $16,392, as part of a regional proposal put forth by MOC leaders.

At its 'Housing Sabbath' MOC gave a standing ovation to the Fairfax Council and announced plans to step up the fight for year-round emergency housing. In addition to targeting nine other cities, including San Anselmo, Tiburon and Novato, leaders aim to persuade Marin County to put in $500,000 and the Marin Community Foundation to put in $250,000. Congregations plan to step up their in-kind contributions of food and shelter as well.