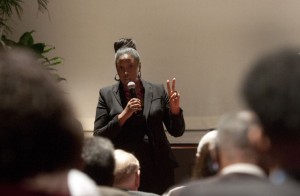 At a town hall on Saturday, February 22nd, Rev. Errol Domingue directly asked leaders from the Louisiana Legislative Black Caucus: Have you ever taken money from the payday lending industry? Will you continue to take their money in the future?

You could cut the tension with a knife.

Together Louisiana leaders revealed that in other states, one of the key strategies of the payday lending industry to block reform has been to buy off a few key members of that state's black caucus.

If the black caucus of a state folds on payday reform, it brings the rest of the reform coalition with it.

The response from legislators on Saturday was powerful. Black Caucus Chair Rep. Katrina Jackson committed NOT TO ACCEPT any further funds from payday lending lobbyists.

It took religious leadership like that of Rev. Domingue and the 70 Together Louisiana leaders who attended Saturday, to represent the voice of the people and show what prophetic leadership can look like in this day and age.