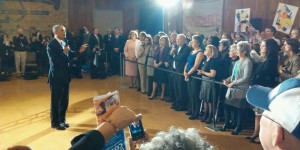 Months prior to the Presidential visit, institutional leaders of Dallas Area Interfaith raised $20,000 to produce 100,000 copies of a multi-colored, bilingual booklet designed to educate uninsured residents about how the Affordable Care Act works. Civic academies, held in church sanctuaries and school cafeterias, have so far reached 1,600 North Texas residents, sometimes as many as 200 at a time. Leaders are learning that many people require basic education about how health insurance works with questions like "what is a deductible?" commonly raised.