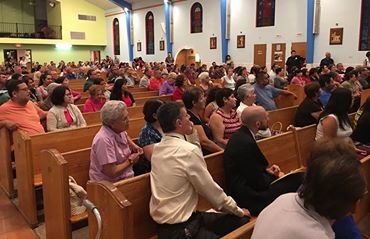 250 leaders of Southern Arizona Interfaith assembled at St. John the Evangelist Catholic with the Tucson Police Department, Monsignor Raul Trevizo, Representative Macario Saldate, the Deputy County Attorney, and a representative of the US Dept. of Justice for a civic academy on 'spice.'

The synthetic drug is considered to induce young users to roam neighborhoods in an unnaturally hungry and thirsty state; officers responded to 930 calls involving spice over the previous 18 months, many involving overdoses.

Said Msgr. Trevizo: "As a society we simply cannot allow them to waste away."

Leaders have launched an awareness campaign that focuses on compassion and assistance towards users. They plan to assemble at the end of the month to develop a plan of action.