TMO Stands with Young Immigrants and for Immigration Reform 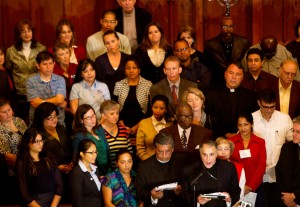 , a young member of the National Honor Society and longtime Houston resident, loves her city and loves America. At a press conference organized by TMO, she tearfully related how Deferred Action for Childhood Arrivals (and The Metropolitan Organization of Houston) brought her out of the shadows and into public life. With her DACA application approved, she has applied for college and is now working after school as a film technician.

She told her story while flanked with dozens of religious leaders from multiple denominations; not only did they support her in her path, they denounced the SAFE Act, which penalize neighbors helping neighbors and immediately brand 1.6 million people between the ages of 18-24 as criminals. Bill King reflects on her story and the implications of proposals like the SAFE Act in the article below: