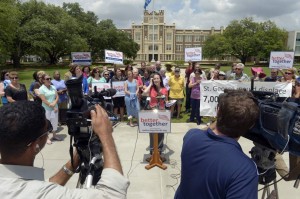 Leaders of 'Better Together' successfully undermined a suburban incorporation effort (in the St. George area) by convincing voters who had signed onto the original petition to withdraw their signatures.

A small minority of St. George residents needed 17,859 signatures to call a vote for incorporation, an essential first step in separating the suburb from the City of Baton Rouge. After these residents turned in 18,000 signatures, 'Better Together' leaders painstakingly reviewed the list, contacting signatories to confirm they understood the significance of their signature . Over 1,100 original signatories were persuaded to submit petition withdrawal forms, thus ensuring that St. George remain part of the City.

Two weeks later, State District Judge Wilson Fields ruled that a lawsuit brought on by St. George organizers should be dismissed, stating, "The registrar has done his job."

How Citizens Turned the Tide on the St. George Breakaway, Better Together

St. George Backers Grudgingly Give Up the Fight, The Advocate

Better Together If That is the Goal, The Advocate