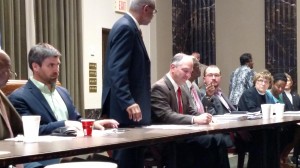 Fulfilling a second campaign promise to Together Louisiana, Governor John Bel Edwards met with 33 leaders assembled from across the state to address the $3 billion projected budget deficit left behind by his predecessor. The first promise -- to enact Medicaid expansion -- was fulfilled in the early days of his taking office.

After announcing that Medicaid expansion would save the state $100 million, the governor requested that Together Louisiana leaders assist him with long-term fiscal reform. Leaders expressed concern about short-term expansions of regressive sales taxes and called on the governor to help address water quality in St. Joseph and a statewide problem of food deserts. See full report below for more.