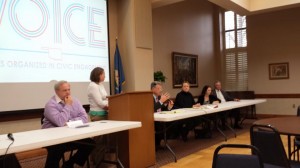 When Oklahoma Gas & Electric attempted to pass on the cost of updating a gas plant to consumers, rather than to the shareholders who benefited from a 50% increase in dividends while the utility delayed environmental compliance through lawsuits, leaders from VOICE-OKC urged the utility commission to reject the utility's plan. They additionally called on the Attorney General to get involved in the $1.1 Billion case to better protect residential consumers; this is the largest case ever presented to state regulators.

Rev. Jonalu Johnstone, a minister at the First Unitarian Church of OK City, argued, "It falls to you, the corporation commissioners, to stand for the consumers in this case, many of whom barely make it now from paycheck to paycheck."

The AG soon responded by recommending that a $410 Million portion of the project be dropped. The hearing is scheduled to continue for two more weeks.

Groups Call for Oklahoma Attorney General to be More Involved in $1.1 Billion Oklahoma Gas and Electric Co. Case, The Oklahoman