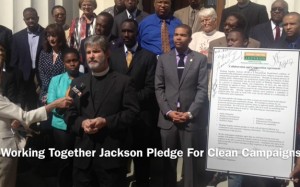 One week after a public accountability session, in which leaders of 'Working Together Jackson' secured public pledges from Mayoral election runoff candidates Chokwe Lumumba and Tony Yarber, both candidates held a press conference promising they would run clean campaigns in the upcoming Jackson mayoral race. On the steps of City Hall, flanked by an out-sized letter of commitment signed by both candidates, Reverend Edward O'Connor announced and explained the pledge.

The previous week, both candidates agreed to assign top staff people to meet with WTJ leaders monthly, to ensure full compliance with the Americans with Disabilities Act in all infrastructure repair, to consider local contractors that hire locally in infrastructure projects, and to meet with Working Together Jackson within 60 days of taking office, to talk about creating a Jackson Workforce Development Institute.