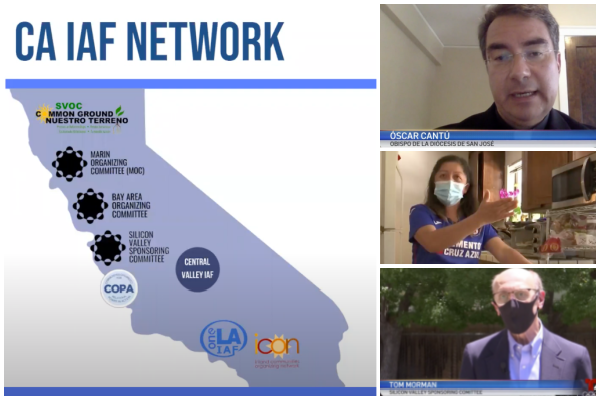 With the deadline fast approaching on a statewide renter eviction moratorium, the California Industrial Areas Foundation (IAF), including Bishop Oscar Cantú of the Catholic Diocese of San José, is calling for an extension of the eviction moratorium and amendment of SB 91 to allow more flexibility with rental assistance.

“Hundreds of families on the Central Coast are barely keeping a roof over their heads — we need more time and more flexibility to give them the support they need to stay housed,” wrote Mayra Bernabe of Communities Organized for Relational Power in Action in an email. “The state has the funds, they need to act to get them distributed to our families while protecting them from eviction.”

More than 500 activists organizing beneath the umbrella of the California Industrial Areas Foundation coalition, including affiliate COPA — a regional nonprofit consisting of 27 dues-paying member institutions across Santa Cruz, Monterey and San Benito counties — gathered for a statewide rally via Zoom Thursday night, participated in a call to action in seeking to extend the state’s rental eviction moratorium and Senate Bill 91 or the COVID-19 Tenant Relief Act, by an additional six months....

Assemblymember Robert Rivas, who spoke in favor of the state’s previous extension of SB 91, warned in January of a coming “wave of homelessness” without the legislation. Prior to COVID-19, Rivas said, some 3.3 million households in California already were living paycheck to paycheck.

“COVID-19 is a financial disaster that no household could have prepared for – and it’s our black and brown communities who are feeling the worst impacts of the virus,” said Rivas, whose district extends into Watsonville. “Not only are Latinos disproportionately more likely to contract the virus than the general population, but they are more likely to have lost their jobs due to the subsequent recession. Latinos, who make up 38 percent of the workforce, account for 50 percent of statewide job losses since the start of the pandemic, and those who lost their jobs overwhelmingly rent.”