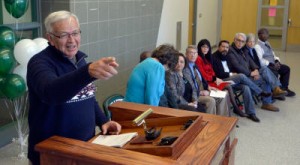 Albuquerque Interfaith leaders breathed a sigh of relief when the official votes came in with more than 65% of the voting public casting ballots in support of a $575 Million bond package. Overall, voter turnout was double the average for similar elections.

Organization leaders including Rev. Trey Hammond, Msgr. Richard Olona and Pauline Artery put their reputation on the line when they threw their weight behind the bond package, organizing Get Out The Vote walks and publishing multiple op-eds. Artery reminded the public that Albuquerque Interfaith not only succeeded in passing a bond package in 2003, they blocked school officials from diverting bond funds to other purposes -- holding the then-Superintendent accountable to the wishes of the voters.

The bond is slated to cover the cost of upgrading the most dilapidated schools, alleviating overcrowded schools with the building of two new ones, adding a district health clinic and expanding technological resources for the children.

Voting Yes On Feb. 2 Is For The Children, Albuquerque Journal