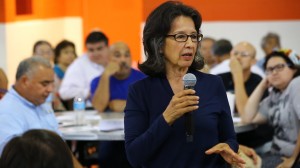 The tone at most of San Antonio's big City Council budget goal-setting sessions may have historically been positive, but that tone notably shifted when 70 COPS / Metro leaders showed up.

COPS / Metro leader Robert Cruz, pointedly asked the city's budget director what the city intends to do with the $24 million in revenue it received in excess of forecasts when the 2015 budget was adopted last year. He asserted that he wanted some of that money go to workforce training program Project Quest and local literacy programs.

Diane Duesterhoeft, also a COPS / Metro leader, argued on behalf of the organization for a raise in the minimum wage for City employees from $11.47 / hour to $15 / hour by 2019. Their intervention followed several recent press conferences celebrating the County's embrace of higher minimum wages for their workers.

In photo, Ms. Maria Tijerina of Our Lady of Guadalupe Catholic Church asks the City Manager why excess revenue in the 2015 budget cannot go to wages, infrastructure and human development.