COPS / Metro Gets Reaction From City on Living Wages, and Keep Pushing 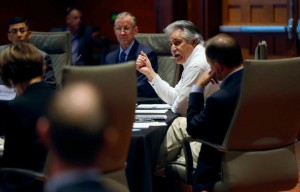 On the heels of COPS / Metro's recent disruption of business-as-usual at a public budget hearing, District 4 Councilmember Rey Saldana took up the cry for a higher minimum wage for City employees.

"Councilman Rey SaldaÃ±a said that while he supports giving relief to taxpayers, he also would support leaving the rate the same if the funding helps increase wages for the city's lowest-paid civilian employees. Communities Organized for Public Service and the Metro Alliance have been advocating for the increase, which has been backed by some council members."

Leaders are lining up the votes for living wages as negotiations continue.