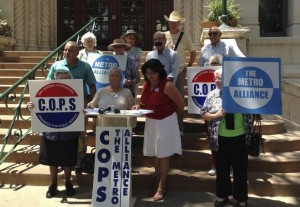 COPS / Metro Alliance leaders visually illustrated the implications of a new City rule with a gagged leader standing on the steps of City Hall. Rosa Araujo-Iracheta of St. Philip of Jesus Catholic Church detailed what the new rules would entail, exclaiming "For some agencies, this blackout period has been in effect since March...That's over five months of being shut out!"

A new San Antonio city rule prohibiting non-profits from talking to City Councilmembers about the budget prompted the press conference. Leaders pointed out that the new rule amounted to a gag order, as it applied even to nonprofits not requesting City funds for themselves.