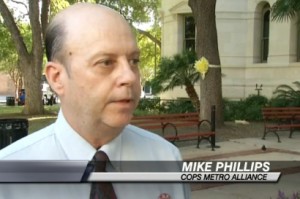 Arguing that "the scope and price tag of this particular deal make it different than other day-to-day decisions," COPS / Metro Alliance leaders descended on City Hall to protest the speed and nature of the proposed $3.4 Billion contract that would pipe in 16 billion gallons of water into the city, and raise prices by 16%.

Specifically leaders asked for attentiveness to the pricing scheme for lower income utility users. "With those big rate increases we think those at the bottom of the income scale should be helped," said COPS METRO Alliance leader Mike Phillips. "If somebody were to go of out their tier they would immediately be hit with the first level tier payments. We want to see the payment tiers reworked."