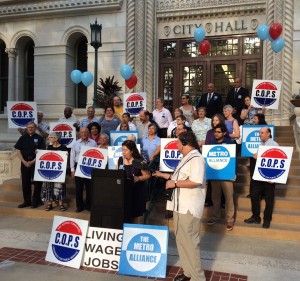 On Thursday September 10th, at the urging of COPS / Metro Alliance, San Antonio city council members unanimously voted for a living wage increase from $11.47 to $13.00 per hour, benefiting 1,300 of their lowest paid workers. By doing so, the municipality joined Bexar County in their living wage increase. Just ten days prior, Bexar county commissioners voted to increase their lowest wage to $13 / hour.

While this concludes a drama-filled and yearlong saga -- which also resulted in raised wages for workers at Alamo Colleges -- COPS / Metro leaders are not planning to rest long. Their long-term wage strategy includes a push to increase municipal wages to $14 / hour in fiscal year 2017 and $15 / hour the year after. They are furthermore setting their sights on wages paid by public schools and hospital districts.