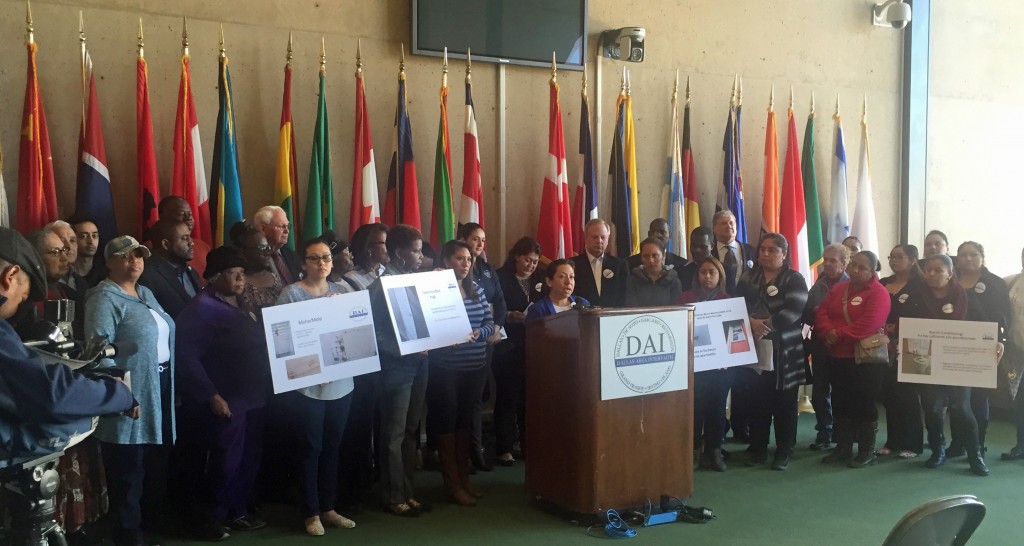 Bachman Lake residents lined up at the podium with photos depicting bedbugs, mold, leaky windows and malfunctioning air conditioning -- all of which came from a neighborhood inspection of apartments involving 60 resident leaders -- organized by Dallas Area Interfaith. On Monday, resident leaders held a press conference urging the city's Housing Committee to adopt their recommendations in a bid to toughen up Dallas' housing code. One leader, Patricia Vega, has two children with asthma living in an apartment with mold in the bedroom and a broken window that leaks when it rains. Said Dr. Barry Lachman, President of the Asthma Coalition of Texas and leader with Temple Shalom, "no family should ever have to live under the conditions we saw in Bachman Lake."

The housing committee agreed, and city council will vote on the proposal next month.

"There was a time I thought of Dallas Area Interfaith as a well-intentioned moral voice for the downtrodden. But now I am seeing a politically smart organization that is acting on...issues from payday loans to substandard housing."

The fight started last fall, when a group of church women approached DAI to learn what their rights were. Months later, and after several parish assemblies at San Juan Diego Catholic Church, resident leaders got a seat at the table. They recommended that the city strengthen its minimum standards for rental housing by requiring that landlords pursue proper bedbug fumigation and mold cleanup when asked, and guarantee functioning air conditioning -- particularly during summer months. DAI also asked for improved record keeping, expanded inspections and more meaningful enforcement.