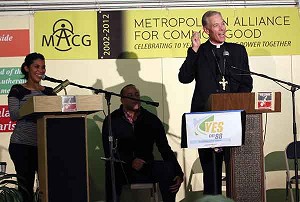 Metropolitan Alliance for Common Good leaders packed an assembly to hear stories from people impacted by Oregon's driver's license laws shared their stories and to advocate for Measure 88 on Oregon's November ballot, which would allow undocumented immigrants to drive after fulfilling all other requirements.

Catholic Archbishop Alexander Sample urged leaders to "get their elevator speech ready" in order to educate as many voters as possible about the measure. The political director for Governor Kitzhaber and former Hillsboro police chief Ron Louie also spoke in support of the measure.

Rallies Held for Those For, Against Measure 88, KOIN 6