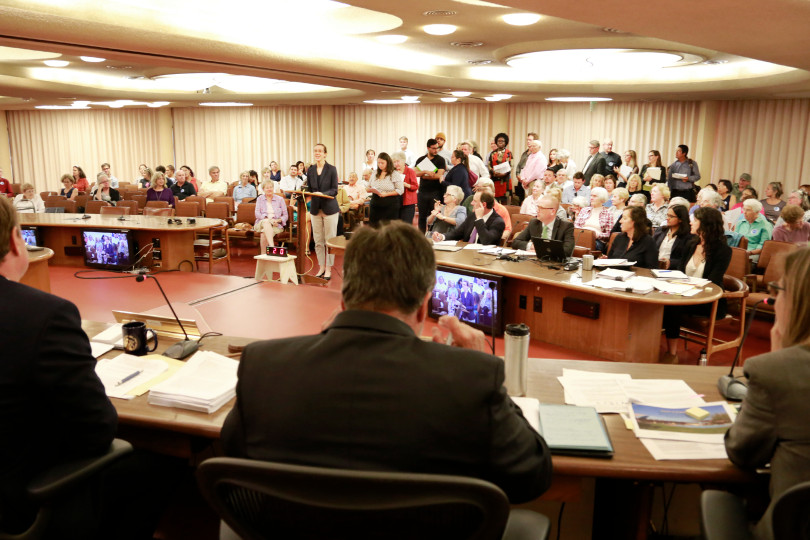 Despite fear of eviction, forty tenants in San Rafael, CA worked with Marin Organizing Committee (MOC) and Marin Legal Aid to fight back against a 40% rent increase that puts most of their families at risk of homelessness or displacement.  After a change in ownership, rent was increased by $700 a month with only 60 days notice, from $1,900 to $2,700 by September 1st.  Tenant and community leaders argued that the rapid rent hike would leave families homeless and deprive 60 schoolchildren from stability in their home lives and education.

Marin Organizing Committee called upon the landlord to negotiate with the tenants and called upon the City of San Rafael and the County of Marin to put stronger renter protections in place.  San Rafael City Mayor Gary Phillips, Marin County Supervisor Dennis Rodoni, and San Rafael School Superintendent Mike Watenpaugh pledged support moving forward.  MOC ultimately shepherded a negotiated deal in which the rent increase would be phased in over 16 months (by 2020).

Having successfully advocated for a Mandatory Mediation Ordinance in 2017, MOC is now pushing for passage of a 'Just Cause' Eviction ordinance which would establish a set of criteria for eviction and provide stronger protections for tenants in a County with historically weak recourse for renters. Leaders packed a Marin County Board of Supervisors workshop to support such an ordinance, including clergy, tenants, and apartment owners who testified that such an ordinance would not hurt landlords operating in good faith.  The Board decided to move forward, directing County staff to prepare options for consideration at an upcoming meeting.