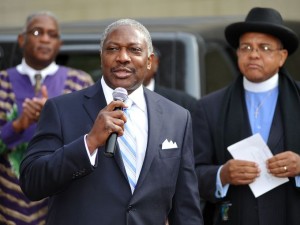 People from across the City of Jackson, including State Senators John Hohrn, David Blount and Solly Norwood, and Hinds County Sheriff Tyrone Lewis, joined Working Together Jackson's "We Care for South Jackson" Saturday morning rally. Bishop Ronnie Crudup announced that it is "evident that Kroger does not favor urban folk and urban areas" given their recent withdrawal of four grocery stores from Jackson. Leaders also pointed out that the city (with 180 thousand residents) now has only one grocery store, while suburban Madison (with only 20 thousand residents) has twice that number.

So far, WTJ has helped saved the jobs of 109 workers that would have been replaced, by assuring their relocation to other Kroger stores at their same pay, and secured commitments from the store to continue their support of local schools. Leaders continue to demand that Kroger refrain from putting a deed restriction on the property that would prevent another grocery store from coming in.