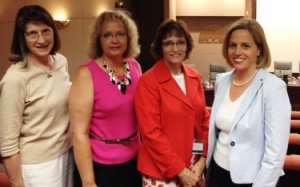 The OTOC Environmental Sustainability Team formed early this year upon learning that the Omaha Public Power District (OPPD) planned to continue burning coal in North Omaha and retreat from the use of renewable energy sources (including wind and solar). They presented 4 key demands to the OPPD Board leading them to revise their plans to end coal burning in North Omaha by 2016 and maintain a minimum use of 32% of renewable sources.

Pictured at right is the team of OTOC leaders that pushed the Board to revise its energy plan. Articles below quote OTOC leader Laurie Gift and OTOC ally Rev. Eric Elnes.