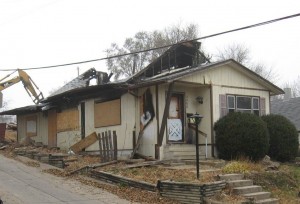 "Many of the speakers advocating the demolition of rundown homes were representatives of Omaha Together One Community....'The first speaker from OTOC showed a variety of pictures of rundown houses. The number of such condemned houses has grown from 400 to 742 in three years,' said Karen McElroy. 'We understand that this is a tight budget year, but the mayor and City Council need to make the tough decisions to preserve our urban neighborhoods,' she said."