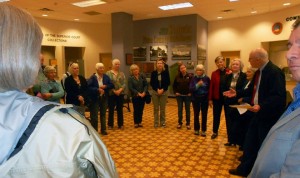 Even with a Board that included a Supervisor elected by the Tea Party, PCIC leaders leveraged a unanimous vote (5-0) in support of a resolution making Pima an "immigrant welcoming county."

Bud Foster of KOLD-TV reports that half the speakers were against the resolution. However, he notes, "the opponents were not organized like the supporters were. Most of this crowd ere from the Pima County Interfaith Council." In photo, PCIC leaders pre-meet before filing into the boardroom. Fr. Tom Tureman of Most Holy Trinity Catholic Church and Rev. Randy Mayer of Good Shepherd of United Church of Christ spoke on behalf of the organization.

Over the last year, leaders of the Pima County Interfaith Council (PCIC) crafted the resolution, taking into account the concerns of their institutional base and those of Supervisors. This is part of a state-wide strategy to demonstrate a constituency in Arizona that supports federal immigration reform.