Together Louisiana Throws the Good Book at Legislators 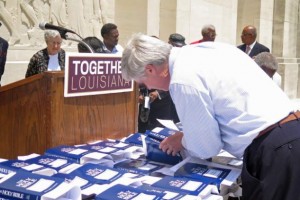 'Together Louisiana' leaders publicly handed out Bibles to Louisiana state legislators, asking them to read it before voting on a payday lending reform bill which would cap the number of times an individual can turn over a loan. Said Rev. Lee T. Wesley of Baton Rouge, "We took notice that some legislators wanted to make the Bible the state book...if legislators want to give the Bible special standing, they should start off by reading it."

One of 45 lobbyists paid to kill Senate Bill 84 revealed he was feeling "like a bug smashed against a windshield" today.

Legislators Get Bible Lesson as Debate During Payday Lending Bill Reignites, The Advocate

Ministers Push for Limit on Payday Loans at Rally, The News Star