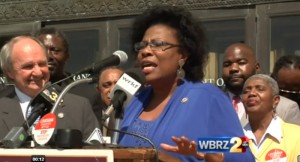 One week after 400 people filled Elm Grove Baptist Church in a meeting about payday lending, 100 Together Louisiana leaders rallied on the front steps of the Capitol exhorting lawmakers to curb the most predatory practices in the payday lending industry. They were joined by lawmakers that pledged to fight for bills that would fulfill this goal.

Baton Rouge leader Dana Jones testified that it took 12 years to get out of debt stemming from an initial loan for her mother's medication. She was joined by others including Penny Fisher, who ended up paying $4,000 for a loan of $300 borrowed in 1995. This is part of a much larger campaign for Louisiana citizens to impact state law.

Bill to Criminalize Some Payday Lending, The Advocate