Undeterred by the Louisiana legislature's reluctance to pass payday lending reform this year, Together Louisiana leaders turned their attention 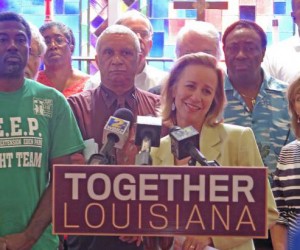 to the Consumer Finance Protection Bureau, taking over a hearing on mobile banking and pointing out the need for intervention on payday lending.

Northern & Central Louisiana Interfaith Marie Brown drove in from Monroe because, in her words, "my sister was also in the payday lending trap." Brown said she attempted to pay off her sister's debt multiple times but was prohibited from doing so by payday representatives. It wasn't in their interest for her to pay off her sister's debt, since they earn more money from her failure.

'Together Louisiana' leader Edgar Cage asserted,"If a person doesn't have economic proficiency, it doesn't mean they should be exploited."

Together Louisiana to Push Feds for Payday Loan Changes, The Advocate

Judgment Day for Payday Lenders: Religious Groups in the South Fight Predatory Practice, In These Times