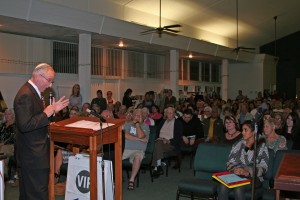 This action came on the heels of a much publicized legal settlement to reinstate a portion of "inflation factor" funds withheld from schools during the budget cutting of the recession. VIP leaders sought commitments from legislators to move the needle and push Arizona per pupil funding up to the national average. The state currently ranks 49th in student spending, and the recently announced settlement would move the state up toâ€¦ 48th.

Legislators in attendance were Representatives Kate Brophy McGee and Eric Meyer, along with Senators John Kavanagh and Adam Driggs.

VIP leaders additionally launched a voter education campaign that will extend into the spring and summer of 2016.