Clergy of Working Together Jackson Stand with Kroger Workers 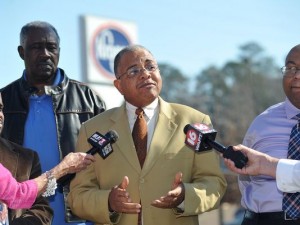 Clergy of Working Together Jackson stood with workers at a press conference organized in the wake of Kroger's announcement that it would close its South Jackson grocery store. Clergy demanded the relocation of 109 otherwise unemployed workers to other stores, noninterference in local efforts to attract a new grocery store to this food desert and continued support for south Jackson public schools.

The company soon announced it would offer the 109 employees positions at other Kroger stores.