One LA Ratifies Roadmap to Power in 2020 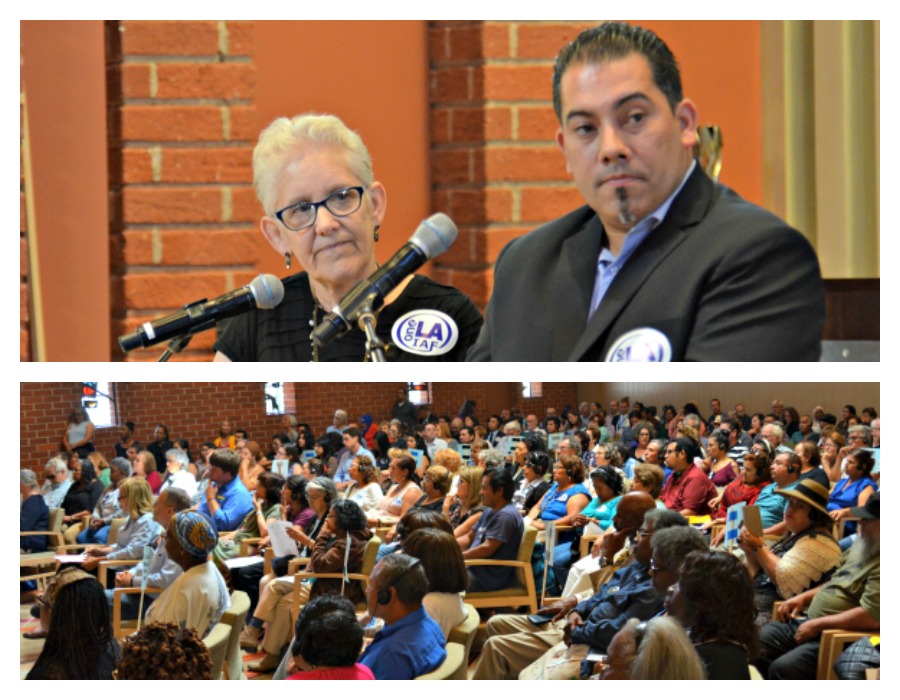 With standing room only, 300 delegates from One LA member and guest institutions convened on Sunday, July 21, 2019 at Temple Emanuel in Beverly Hills to set an ambitious agenda for 2020.

"Our 2020 vision is a roadmap to building power," said Nancy Goldstone, Co-Chair of the assembly and member of Temple Beth Am. "I don't need to tell you that it will be a watershed year, nationally and locally. While many will be focusing on the presidential election, half of LA city council and half of LAUSD board members are up for election, and we have a major contest in LA County Supervisor's District 2. That is where decisions are made that affect us daily."

Teams of leaders from across LA County shared stories about what is at stake around One LA's four issue campaigns: immigration, housing, human trafficking and mental health. "We need our state senators, county supervisors and city council members to do more to protect immigrants," shared Yadira Mireles, on the immigration team at San Gabriel Mission. "People need lawyers. They need good information. People coming out of detention need shelter and services. We can't just be a sanctuary city in name only. We want elected officials who will work with us so that Los Angeles will truly be a place that welcomes immigrants."

State Senator Holly Mitchell and City Attorney Mike Feuer joined the assembly and reacted to One LA's vision for building power. When asked if she would join One LA leaders in a listening campaign on mental health issues, Senator Mitchell rose to the challenge and offered to co-host a session. City Attorney Feuer laid out specific ways his office would work with One LA on all four issue campaigns, encouraging leaders to contact his office directly in cases of immigration fraud, intelligence on human traffickers, and housing fraud.

One LA leaders then caucused by region on specific strategies to build more power ahead of the 2020 elections, including broadening and expanding their constituencies through recruiting other institutions, and raising more hard money to hire and train organizers. "Hard money is our favorite kind of money," said Janet Hirsch of Temple Isaiah. "It is money that we control, and that lets us set our agenda on our own terms and our own time."  Leaders pledged $200,000 in hard money commitments for 2020.

Before adjourning, leaders unanimously ratified a proposal to organize candidates forums and conduct a robust Get out the Vote Campaign ahead of the 2020 elections.

Money Matters: A Reflection, by Diane Vanette, leader of One LA and Temple Emanuel of Beverly Hills