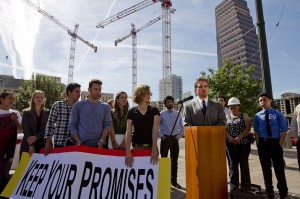 "The Austin-based Workers Defense Project is asking the courts to step into its wage dispute with the developers of the downtown Austin J.W. Marriott hotel under construction.

'Developers need to keep their promises to taxpayers and workers, and the city must enforce its own rules,' said Kurt Cadena-Mitchell, a leader of Austin Interfaith, a multi-congregation group pushing the city to establish a standard above minimum wage on construction projects that are granted economic development deals by the city."