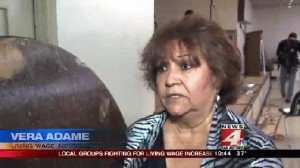 COPS / Metro Alliance leaders flanked Bexar County Judge Nelson Wolff as he announced his instruction to the County Manager to research and craft a plan to raise the County minimum wage from $11.47 per hour to $13 per hour next year, and to $15 per hour within three years.

Two days prior, 325 COPS / Metro Alliance leaders gathered at Sacred Heart Catholic Church to announce their campaign to boost the wage floor for city and county employees from $11.47 per hour to almost $15 / hour. Elvira Adame shared how it angers her to see her daughter earning only $8.50 per hour at a public community college, leaving her "stressed and tired all the time from working so hard." Adame's daughter works full-time without benefits, sick leave or vacation time; to pick up the slack she picked up a second job, but even then is barely getting by.