One LA, with LA Mayor, Sheriff, Takes On Housing & Immigration 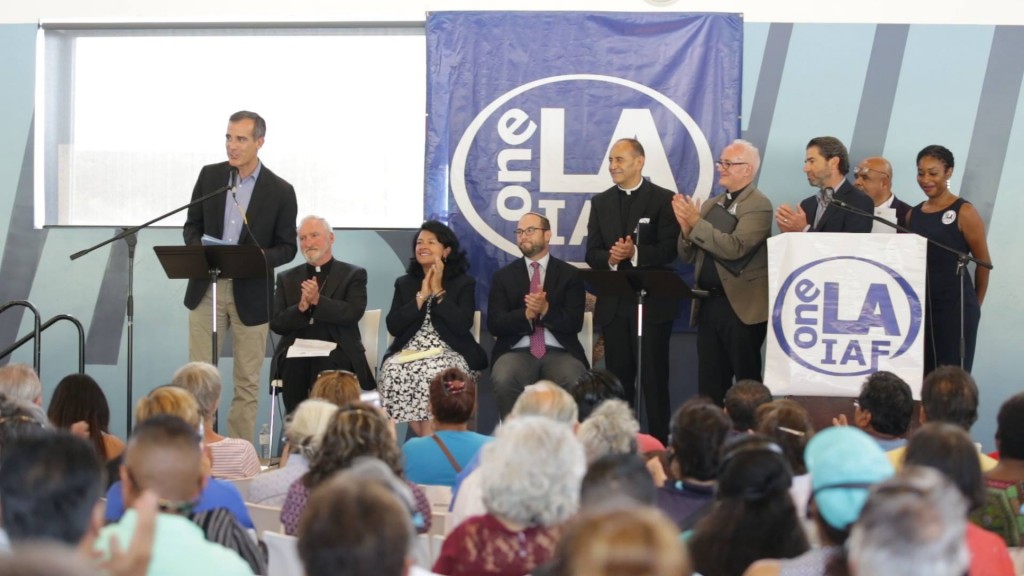 500 One LA delegates from 28 member institutions assembled to hold themselves, and elected officials, accountable on a Sunday afternoon in July. Delegates ratified a new strategy team, updated the bylaws, and pledged increased dues.

In response to compelling stories, and the presence of hundreds of delegates, Mayor Eric Garcetti committed to working with One LA on concrete solutions to the affordable housing crisis, including a proposed linkage fee that would generate $75 Million per year towards affordable housing construction. Garcetti not only became the first mayor of a major city to sign on to the national IAF-initiated "Do Not Stand Idly By" campaign for safer guns, he additionally pledged to persuade other mayors to sign on.

After several young people shared stories about their immigration experience, the President of the LAUSD school board, Ref Rodriguez, pledged to support One LA and the Superintendent's efforts to create ways for the district to provide support to young "newcomers" (recent immigrant arrivals & unaccompanied minors).

Regarding the treatment of 190,000 immigrant victims of crime (mostly women and children) who qualify for and are awaiting U-visas, Sheriff Jim McDonnell committed to working with One LA and the Archdiocese of Los Angeles to place a stay on their deportations. U-visas are reserved for victims of crimes who are wiling to assist in the investigation or prosecution of the criminal activity.

Affordable Housing May Soon Get $75 Million in Funding Thanks to Efforts of Interfaith Organization, Angelus